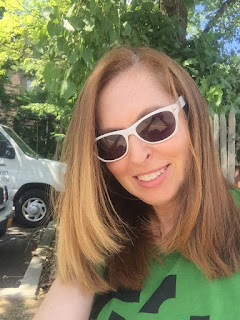 My name is Emma Richman and I am Hailey's proud mom. I would like to share a bit of our background which led up to Hailey's role as Assistant Director at Puzzles To Remember (puzzlestoremember.org) and starting her blog: Kid Caregivers.

My father (Hailey's grandfather) was diagnosed with Alzheimer's Disease (AD) in 2007 and passed away in 2008.  During that difficult time, I researched blogs that dealt with dementia. I was looking for support. I found a phenomenal blog called: The Alzheimer's Reading Room (www.alzheimersreadingroom.com) created by Bob DeMarco.  That web blog was a lifeline for me.  HIs blog: gave me advice, comfort, made me cry and laugh. He shared his tribulations involving his mother who had Alzheimer's disease, informed me about the latest information regarding the disease and gave me hope. If I did not have his online support, I would have become seriously depressed and isolated from the world.

One day, Bob posted a story about Max Wallack, an empathetic child prodigy who cared for his great grandmother when he was only 8 years old. After his great grandmother passed away, he started Puzzles To Remember (a 501(c3) charitable organization which distributes puzzles to AD facilities and nursing homes. Research has shown that puzzle-solving stimulates the visual cortex (occipital lobe). This action,  may reduce agitation, calm, and stimulate memory function in people with dementia. I wanted to become involved in the organization. I contacted Max and set up collection boxes for puzzles. I brought them to the Veteran's Home where my father was a resident in his final year of life. Max sent over boxes of puzzles to the Veteran's Home as well.

Sadly, in 2010, my mother was in the early stages of dementia. At this point, Hailey was 4 years old. She would visit mom and together they would solve puzzles. Hailey had an understanding and maturity not typical for a four year old (in my humble opinion :-)  She kept mom engaged and it was a very happy and productive time for both grandmother and granddaughter!  Other residents at mom's facility started participating in puzzle-solving with Hailey. As we know, children and seniors are a lovely combination, which benefits both parties. As Hailey grew, her involvement with Puzzles To Remember (PTR) increased. She started collecting more puzzles with me and we delivered them to facilities. She also saved up her allowance and sent PTR donations throughout the year. Max was impressed with Hailey's involvement and at the age of eight, he appointed her the honorable title: Assistant Director of Puzzles to Remember. She takes that role seriously and is now involving several friends, her school, library and community in puzzle collecting. She is planning to create a "summer camp" made up of kid volunteers who will go with her to nursing homes and spend time with the the seniors puzzle-solving.

According to the National Alliance for Caregiving there are at least 1.3 million children between the ages of 8 and 18 who are caregivers. Hailey realized that children can make a big difference in the world.  Unfortunately, Hailey and I had difficulty finding other kids who are going through the same thing as Hailey.  There were times, when Hailey would have loved to know that there were other kids "out there"; who are also going through similar experiences. As the saying goes, "necessity is the mother of invention", so Hailey created the type of support group that she would have loved for herself. Her goal is for kids to have a platform to share ideas, offer tips, and get advice. She shares her experiences, to model for other kids.  Kid Caregivers is in its infancy, since the seed was launched in February. I am excited to report that there are readers from: India, Africa, Greece, Germany, Israel, Russia, UK and the United States. Clearly caregiving is a worldwide issue and for children a very sensitive one. Her goal is to let other kids know that they are not alone. Hopefully, her dream of reaching "hundreds" of kids will become a reality. So please spread the word.  Thank you for reading her blog!